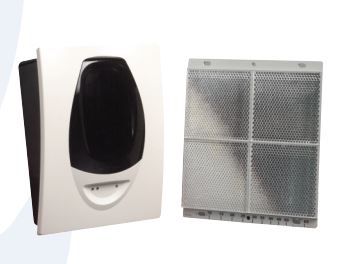 The 6500RS and 6500R operate primarily on the principle of light obscuration utilising an infra-red beam. Optical beam smoke detectors are particularly appropriate for protecting buildings with large open spaces such as warehouses, atriums etc. The 6500RS and 6500R detectors are combined transmitter/receiver units that can be directly connected to a conventional detector circuit. The infra-red transmitter generates a beam of light towards a high efficiency reflector. The reflector returns the beam to the receiver where an analysis of the received signal is made. The change in the strength of the received signal is used to determine the alarm condition. The 6500RS features a unique remote test capability that fully tests both the optics and the electronics of the device. An optical filter is automatically introduced in front of the optics, attenuating the returned beam and causing the unit to go into alarm. The 6500R does not include the remote test capability.

The alignment of the detector is simplified with the aid of the detector’s gun sight targeting device. This can be further tuned using the numerical signal strength indicator to set the optimum alignment. The sensitivity of the detector can be set to between 25% and 50% obscuration, providing application flexibility to suit the environment in which the detector will be installed. In addition to the four fixed value alarm thresholds, there are two variable thresholds that automatically compensate for changes in the environment which could otherwise result in unwanted alarms while remaining within a known sensitivity range. The detector incorporates automatic drift compensation, whereby the detector will adjust its detection thresholds in line with any long term signal reduction of the beam caused by contamination of the optical surface. The detector can be adjusted up to 10° vertically and horizontally for alignment. Where greater angular adjustment is required, the multi-mount accessory enables the detector to move through 28° vertically and 360° horizontally when ceiling mounted or up to 23° vertically and 90° horizontally when wall mounted.