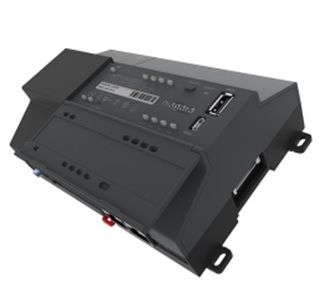 It has the ability to present its status information and receive commands in BACnet protocol form. In addition, it supports the automated testing of DALI based Emergency luminaries and Signs. When utilized for lighting control and lighting status display application (i.e. no emergency testing), it takes the role of bus master on the RS485 spine linking a number of RB2000s each of which drives an MLS bus capable of supporting up to 100 separate lighting zones comprised of up to 200 individual presence detectors with photocells.

The MLSUC1250 assumes the role of Bus Master on the MLS Spine. This means that all the RB2000s should be given consecutive, unique non-zero addresses. The last unit at each end of the MLS spine should be configured to terminate the two RS485 signal pairs, A-B and Y-Z. In the case of an RB2000 being the last device this is simply a matter of sliding the switch behind the address setting switches to the ON position.