Honeywell Industrial Fire CPU Card is the system's central unit and contains the micro-controller, which processes all the information provided by the other cards of the panel. 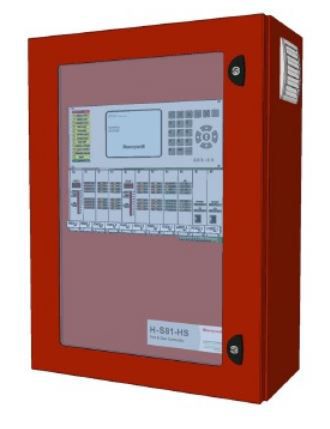 Honeywell Industrial Fire CPU Card is the system's central unit and contains the micro-controller, which processes all the information provided by the other cards of the panel. In addition to the micro-controller, the card has a flash memory, a buffered static RAM, a watchdog circuit and an Ethernet controller with an RJ 45 Ethernet output connector. The CPU card can be used in either single or redundant configuration with two CPU’s operating in parallel. Both CPU’s process information from the cards of the panel, but only one (the primary) of the two interacts with them. Once the primary CPU stops operating, the other immediately takes its place without disrupting ongoing operations or losing captured events. The H-S81-HS/C-ULS and the H-S81-HS/C-ULD are the compact versions of the H-S81-HS with a single or double power supply, respectively. Designed for locations with space limitations and for smaller applications seeking to combine fire, gas detection and suppression panels into one product. It provides an integrated industrial protection system that includes flame, gas and smoke detection; logic control and networking equipment; suppression and extinguishing capability; public address, sounders, beacons, and other safety components. Each panel is a modular system comprised of an enclosure, display, a redundant CPU, and up to 8 (eight) I/O cards. The number and type of I/O cards are selected based on the protection needs of the facility. These panels have a single or dual redundant power supply to match either requirement. Additionally it supports the F7011-UL Safety Bus Control Card which controls remote modules installed on a unique Bus. Up to 64 remote safety bus modules can be controlled by a single F7011-UL control card. This expands the capacity of the control panel while providing optimal functionality in fault condition with high communication speed.