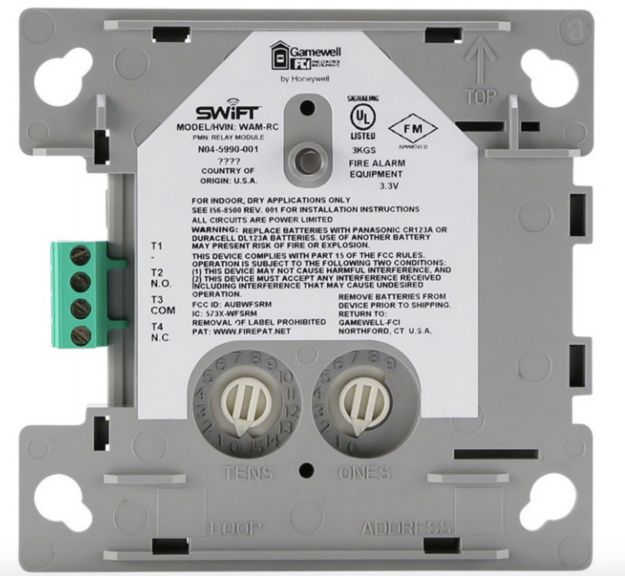 WAM-RC SWIFT® wireless modules are intelligent (addressable) modules that provide secure, reliable communication to the fire alarm control panel (FACP) across a Class A mesh network. WAM-RC Wireless modules create an opportunity for applications where it is costly (concrete walls/ceilings, buried wires), obtrusive (surface-mount conduit), or possibly dangerous (asbestos) to use traditional wired devices. In addition, both wired and wireless devices can be present on the same FACP providing an integrated wired-wireless solution for increased installation potential.

WAM-RC SWIFT wireless relay modules allow the control panel to switch contacts by code command, activating functions such as a remote power supply (in conjunction with a monitor module), elevator recall, door holders, and fan shutdown of wired devices or SWIFT devices within the same mesh network. The relay contains an isolated set of Form C contacts, which operate as an SPDT switch. Circuit connections to the relay are not supervised by the module. The module also includes a panel-controlled LED indicator.

The devices communicate across the mesh network through a gateway to the FACP. The FACP views the SWIFT wireless device and another addressable device on the system providing similar detection functions and outputs as a wired counterpart. In addition, both wired and wireless devices can be present on the same FACP to meet the needs of a given application. A SWIFT wireless system can use any combination of modules, smoke, or heat detectors.

The mesh network within the SWIFT system creates a child-parent relationship between the devices so that each device has two parents, providing a second path for communications on every device. If one device can no longer operate for any reason, the rest of the devices can still communicate with each other, directly or through one or more intermediate devices. The SWIFT system also engages frequency hopping to prevent system interference, whether intentional or accidental.