The Notifier by Honeywell is a distributed audio amplifier. 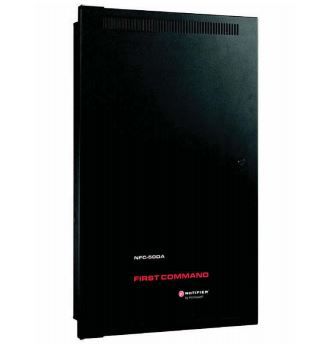 The Notifier FirstCommand by Honeywell are intelligent 50 watt, 100 watt, and 125 watt amplifiers that are used with the NFC-50/100(E) Emergency Command Center. These distributed audio amplifiers amplify an audio message for distribution throughout a facility when additional audio power is required. They are designed as selfcontained units and can be conveniently installed near an area of protection to reduce wiring demands for speaker circuit outputs.

For installations that require survivability, the NFC-50/100DA can be configured for 50 watts of primary power and 50 watts of backup power, or 100 watts primary with 50 watts back up and comes standard with eight built-in, fully supervised speaker circuits/zones.

Any combination of up to eight, NFC-50DA(E)s, NFC-50/ 100DAs, or NFC-125DA(E)s can be connected to the NFC-50/ 100(E) to provide a total output of 1100 watts of audio power and up to 24 speaker circuit outputs. These distributed audio amplifiers are wired to the data bus and the Audio-Riser bus of the NFC-50/100(E) primary operating console. They have their own power supplies with built-in battery charger and are both fully supervised by the NFC-50/100(E) for any trouble conditions.