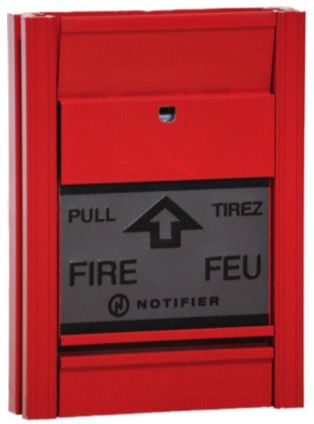 and integrated break-glass rod. The alarm contact for the manual station is rated for 1A, 24VDC. The contacts are gold plated

to avoid the risk of corrosion.

The MPS Series manual stations are available as single or twostage for conventional systems. Models N-MPS-SC/SCC are

key-switch. A 2nd stage key is supplied with each unit to activate

All models are available with screw terminal connectors and a

hex key for reset. Two-stage models also include a key-switch

and 2 keys. All conventional models mount on a single gang

box or on a single gang box with a plaster ring.

with all conventional manual stations.

The Notifier MPS Series manual stations are operated by pulling

place the handle in the normal upright position. Replace the

located above the handle. Operation of the key-switch, when

connected to a separate alarm initiating circuit, will activate the

To reset the second stage activation, return the key-switch to the

Models provided with an ancillary contact for mag-lock release,

will simultaneously release the locally connected mag-lock upon

pulling the handle on the front of the manual station.