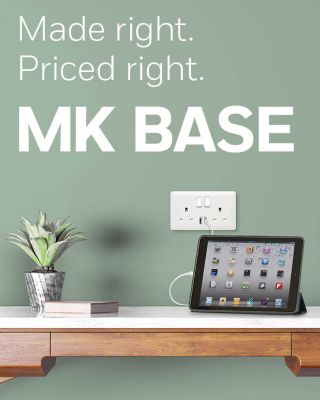 Perfect for prudent budgets and infused with MK quality

The MK Base range was created to meet a fundamental need for reliable and safe wiring devices from a trusted manufacturer that are refreshingly priced for prudent budgets.

SPEAK TO AN EXPERT
FIND A STOCKIST The perfect partner to the renowned Logic Plus™ range, MK Base is a broad and practical range that looks at home in any interior. A value range where quality counts.

Featuring one and two gang sockets with integrated dual USB ports, LED dimmers and a flexible grid plate and euro module solution to expand the range even further.

Infused with the same MK quality you know

Reliability and performance comes as standard so you get a fit and forget solution, backed by our MK 20 year product guarantee. (Excludes electronic products.)

We’ve been setting the standards for over a century so you can specify, install and use MK Base with complete confidence.

Fully compliant with British Standards and European Standards, each product undergoes 100% electrical and visual testing at the point of manufacture.

Working with an independently accredited test laboratory, we have carried out testing to the latest industry standard – ISO 22196:2011.

Additionally, we have also tested against:

NEW - Anti-viral testing resulted in a kill rate of 99.99% for Phi – X174, the internationally recognised  standard in anti-viral testing. Used to test the resistance of critical PPE to blood-borne viruses as well as in air filtration systems it is also one of the smallest known non-enveloped viruses, making it harder to detect and kill.

Easy access terminals with clearly moulded markings, along with backed out and captive screws all ensure quick and simple installation. It’s a perfect fit every time.

Ensure you insist on convenient and time saving features.

MK Base is readily available nationally through a wide network of expert, dedicated stockists, ready to support you.

Find an MK Base Dedicated Stockist

Speak to an expert

We’re happy to help. Let us know if you need any specification support, technical advice, would like to speak to a sales person. Fill in the form below and we’ll be in touch shortly.