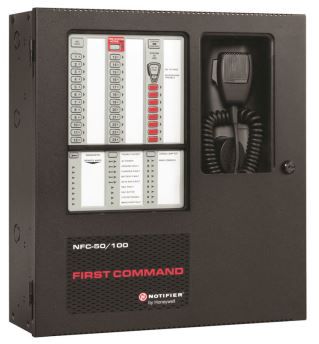 Notifier’s First Command NFC-50/100 and NFC-50/100E are multipurpose emergency voice evacuation panels for fire applications, mass notification applications, or both. The First Command delivers 50 or 100 watts of audio power for distribution to up to eight speaker circuits (i.e. zones). The NFC-50/100(E) comes standard with a single speaker circuit and a built-in 50 watt, 25V amplifier. A secondary 50 watt amplifier (NFC-BDA-25/70V) can be added for single speaker circuit backup or to increase system capacity to two speaker circuits and an additional 50 watts of audio power. An optional NFC-CE6 module added to the NFC-50/100(E) will upgrade the system to a maximum of eight speaker circuit outputs. All speaker output circuits can be wired in either Style Y (Class B) or Style Z (Class A) configuration. The NFC-50/100(E) has fourteen field programmable messages (up to 60 seconds each), built-in field configurable pre- and post-announce tone generators and a fully supervised Notification Appliance Circuit (NAC) with 2.0 amps of synchronized NAC power.

For fire protection applications, the NFC-50/100(E) is an adjunct (slave) to any UL listed FACP, providing reverse polarity or contact closure; can be used as a stand-alone unit for non-fire applications. For seamless integration between fire and mass notification, the NFC-50/100(E) can be directly activated via serial communication between the NFW-100X, NFW2-100, NFS-320, or NFS2-640. Activation of the NFC-50/100(E) via other FACPs uses the eight on board Command Input Circuits (CMDs). Two of the eight CMD circuits (CMD 1 & CMD 2) can be individually field programmed for activation by an FACP Notification Appliance Circuit reverse polarity and all eight can be activated by a contact closure. In addition, the NFC-50/100(E) can be activated from a building's Private Branch Exchange (PBX) with the integral night ring feature.

All NFC-50/100(E) programming is done by using a simple, built-in programming utility accessed from any laptop. For added flexibility, the NFC-50/100(E) supports both 25V and 70V speaker output operation. By adding a 70V transformer conversion module (NFCXRM-70V) or an additional 70 volt secondary amplifier (NFC-BDA25/70V) the system supports 70 volt speaker devices.

The NFC-50/100(E) can expand in order to accommodate larger or more complex installations. To add more control and increase system capacity, any combination of up to eight external remote consoles (including the NFC-LOC, NFC-RPU, and NFC-RM) and up to eight distributed audio amplifiers (including the NFC-50DA(E), NFC100DA(E) and NFC-125-DA(E) can be connected on the external data bus and audio riser data bus to create a fully integrated command center. A fully loaded system supports up to 1100 watts of total audio power and up to 24 speaker circuit outputs.