CDH4U5 is an intelligent LCM providing connections for multiple luminaires, up to 5 presence detectors and SELV inputs. 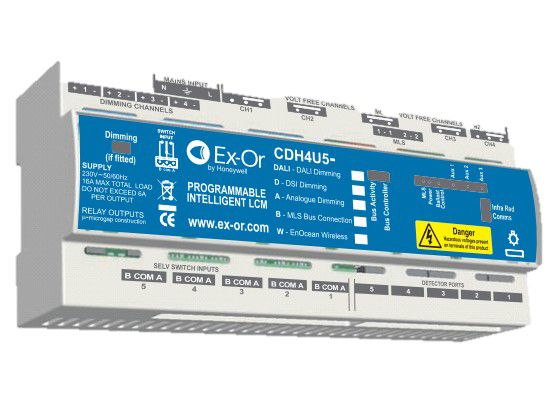 Ex-Or Connect Digital family of Intelligent Connection Centres is being expanded with the launch of Hard-wired 4 and 8 channel products which, in common with the existing CDH4U5 are designed to provide flexible lighting control solutions in applications such as Offices ,Classrooms , Corridors , Atria , Hotel Rooms , Meetings and Conference Rooms , Factories and Warehouses. CDH4U5 is an intelligent LCM providing connections for multiple luminaires, up to 5 presence detectors and SELV inputs. The product simplifies installation whilst providing an intelligent lighting control system. Provision is made for 4 volt-free power outputs rated for 415V isolation. The CDH4U5 has the ability to operate from dual supplies with the capability to modify its operating behaviour when failure is detected on one of the supplies. This feature is described in greater detail in application note AN4027.